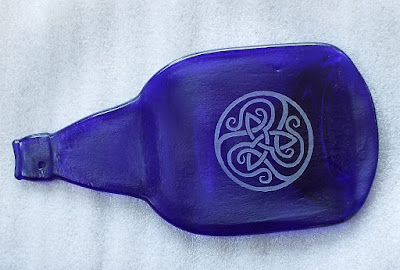 I'm still playing with designs and sandblasting. I mentioned in the last post that I was doing a couple of bottles with designs in them. So here are pictures of the two that I did. I will be doing more for sure! I really need to get my hands on more cobalt bottles, I love the way the blast shows up against the background! 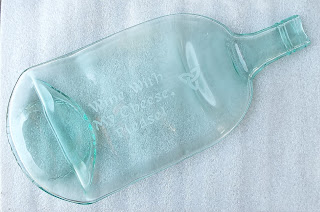 I've mentioned the wedding plates. I had three wedding plates to do, and I had a couple of projects I needed to do that required a french vanilla glass. This glass is fun to play with and gives a great chemical reaction with some other glasses. I have limited funds due to losing about 6 weeks of work due to a broken arm (just below the elbow) so I think, no problem! I'll just get a sheet of french vanilla and do the wedding plates out of that. One problem I should have foreseen but didn't; the sandblast of the names and wedding dates didn't show up very well. It would have been useful had I decided this before I took the mask off, paint them to highlight and no problem, right? But of course, I'm always running faster than my brain can think, and I'd already removed the mask so I needed to figure out how to fix this. The first plate I used a low fire paint, but because of the technique used on the plate, the plate face is a bit rough, so it wasn't just a matter of putting the paint on and then wiping it off on the "smooth" areas, leaving it in the sand blasted areas. I did my best to clean up the outside areas, but I felt it came out very uneven. (No picture). 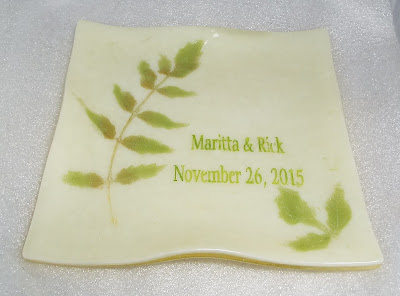 For the second wedding plate, I didn't have a chance to paint it before I left to sell at a farmer's market, and when I got home, I was too tired to try and do that kind of small hand work. I needed to deliver the plate the next day. I wondered if Pebeo paints would work. I checked my stash. I had the perfect color, but it was so old it wasn't good. I thought, ok, I could run to the store in the morning, paint it, and it would only need to be baked in the oven for 30 minutes and I could make the time schedule. I run to a local store only to find out they no longer carry the regular Pebeo paints, only those with special effects like mottling. Oi. (Notice how this only happens when you are facing a deadline?) With the help of a sales clerk I found a Martha Stewart paint that doesn't require firing, the paint cures on it's own in 21 days, even to the point of being dishwasher safe on the top rack. I also picked up some Rub N Buff for future experimentation.  So, I am happier with the results, and I have one more to do, but I will try one more experiment plate that I will hopefully remember to paint before I take the resist off. I plan on incorporating more of this in my work!
Posted by CeltCraft at 2:00 PM No comments: Links to this post

Taking it to the Next Level Using a Silhouette Cutting Machine

A few months ago, I bought a Silhouette Cameo package. The main reason I bought it was because I had been following an artist who started using the Silhouette to carve/emboss metal clay. I'm not a scrapbooker, but this use of a cutting machine intrigued me.

I had first become aware of these types of machines several years ago with the introduction of Cricut. I was intrigued, but at the time, you had to buy cartridges that contained designs in order to cut them. I like the idea of using Celtic designs (obviously) but I couldn't seem to find any Celtic style cartridges and wondered if it would be worth the investment. Later I heard about the Silhouette and that it came with design software so you could make your own designs. I kept on investigating both machines and learned that after a time, Cricut also came with software to design your own images. Cool. Cricut then introduced a wireless version. (Silhouette's Cameo 3, due out this year is also now wireless.)

Then I saw what Wanaree Tanner was doing with metal clays and the Silhouette.  Her artistry is amazing. (You may want to look through her other videos on YouTube). This is the direction I want to head. By the time I contacted Wanaree, she was no longer teaching the technique but she directed me to Cindy Pope and her classes on CraftCast. I still didn't have a Silhouette, but I signed up for the class last November. The rates for these classes are very reasonable. One great thing about CraftCast is that you have a link to the class you can go back to and rewatch over and over. Good thing! I enjoyed the class and I am still learning from watching it.

So, I got my machine and started playing with it. The software has a bit of a learning curve, and I'm learning as I go. I cut out a small stencil with it and used it to sift powdered frit onto a glass pendant. No picture, the pendant didn't turn out because of another element I added to it, but the stencil worked great. Then I decided to play with my business cards. I had changed my business cards a couple of years ago to a) stand out and b) use them to tag my jewelry with. I had been using a punch I found from a craft store. I loved the shape, but the size I had was just a bit too small. I bought the bigger size, but it was just too big, and I never used it. So, I printed out my business card sheet, found a similar shape of tag in the Silhouette design store and made it just a tiny bit bigger than my prior cards. Very happy with it! I still haven't explored the print and cut option and making use of the registration mark feature, which may actually make it easier to do this, but I do plan on it, and for now, this works!

At the Glass Expo in Vegas this year I took a class on adding images with sandblasting. Combined with my Silhouette, this is going to expand my designs in an amazing way! I had already been doing something as a gift for my friends that I call my Wedding Plate. I get leaves from the garden they got married in or held their reception in, used the Fossil Vitra technique to "emboss" those leaves into a glass plate, then etch their names and wedding date onto the plate. I played around and found I could get a fairly decent resist using the Silhouette and it's stencil material. So not only could I blast the wedding plates, I could do some fun dichro designs as well. So I made sure I added a sandblast cabinet to my toys.

There are two different types of stencil material, one a harder stencil like you would use to trace or paint through that I've picked up from the local hobby store, and the soft stencil material that has a sticky back to be positioned and act like a resist which is a Silhouette brand, so you need to plan accordingly. Keep in mind, I've only been playing with the sandblast part for about a month, but I am so happy with it, and I'm learning continually!


I've got some flattened wine bottles I plan to sandblast this week (I'm waiting for more resist to come in!) and if I can get myself organized, I'll post pictures of those later on.


As far as some great resources I've discovered, one is Silhouette School which has both video and written tutorials and often posts great project ideas. Written with a lot of fun and a sense of humor. She has written several great ebooks on how to use specific features as well.

Another great resource is a series of videos on YouTube called "Tracing Without Tears". Great info on how to transform pictures, etc. into items you can cut on your Silhouette. I highly recommend both resources!

Posted by CeltCraft at 12:40 PM No comments: Links to this post