Hobbies Have Taken Over My Life 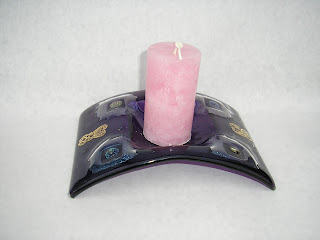 I've always felt the need to create something. I learned to embroider a little from my grandmother. I learned very basic knitting and crochet from my church as a teenager. My mother saw a "new" thing at a hobby store one time and bought me stuff to do "quilling". ( http://en.wikipedia.org/wiki/Quilling )  I learned how to play guitar, saxophone and a little bit of banjo and piano while I was growing up as well. I sang a bit, too. I was a theatre major in college. Shortly after I was married I learned how to do counted cross stitch. Then came seed beading and a bit of jewelry making.

Then, on Halloween 1998, I think, a friend and I were scouting out jewelry/bead stores in Salt Lake. I was handed a "Lapidary Journal" magazine, October issue, and since it was the last day, I got the magazine for half price. At that time, Lapidary Journal October issue was called their "bead annual" and focused entirely on beads. This particular issue had an article about Kristin Frantzen-Orr in it and showed pictures of her beautiful beads. It didn't stop there, though, in the back of the magazine there were step by step instructions on how to actually create one of her floral beads. ( http://www.jewelryartistmagazine.com/feature/kristen-frantzen-orr.cfm )  Little did I know what was going to happen as a result of buying that magazine.

I was fascinated by that article, I had never heard of making beads in a torch although all through my life I had collected the wonderful lace work items those glass workers at the state fair and malls sold. This was a wonderful world of colored glass I didn't know was out there. I must have talked about it a bit because my husband bought me a beginning lamp working kit for Christmas that year. Then, by 2000 I had decided I had to open a bead store so people could buy my wonderful beads. (Ok, I didn't say I've ever had a close grip on reality, lol!) So, for seven years, my new "hobby" actually became my business.

I had a great time at that place. Met some fun people. Held classes and taught people how to bead (including two Native Americans). I can count on one hand the number of times I got angry or frustrated at any of my customers that whole seven years. During that time both my children married and I sewed and beaded two bridal gowns. But after seven years, I was still  the only employee there, six days a week. I think my hubby felt like he would actually like me to participate in a few activities with him once in a while. So I closed the store in Dec. 2006. (Ok, it was a couple months short of a full seven years, sue me.) Then in 2008, I got hired by my local stained glass studio.

For the last two and a half years I have taught beginning and intermediate glass bead making, fusing glass jewelry, soldered glass jewelry and made some pretty fun stained glass panels. I've joined a glass guild, and started teaching classes at a second studio. I've had my first gallery sale. I've been interviewed for at least two on line articles. I flinch when I do an art or gift show and someone walks by my booth and says "Oh that must be such a fun hobby!" Um, nope, not a hobby. I'm not famous or a leader in my field, but I'm actually earning my living making glass and teaching others to do so.

I've passed into a surreal state of being where there is no such thing as a hobby. It's my life. If I have the chance, I might pull out an afghan I've been working on for years and crochet on it. Some day it may actually be finished. I haven't touched cross stitch for a long time, even though I really love doing it. My grandmother was a prolific knitter, and since she has passed away, I feel the pull to learn how to get past casting on and basic knit stitch as some sort of a homage to her. I resist the urge to buy quilling supplies when I see them at the store. I take care of the embroidery urge as I do bead embroidery. I still do the music thing at church... I'm the one that chooses the music selections every Sunday.  But glass is part of almost every single day in some form.

I think I can be ok with saying I don't actually have a hobby right now.

Posted by CeltCraft at 7:40 PM No comments: Links to this post

We All Make Mistakes - Showing Respect 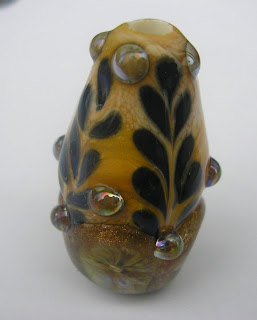 I've really had copyright on my mind the last few days. It was prompted by a post I saw on FB. A woman by the name of Monica Gaudio was contacted by a friend who saw an article of hers in a small "on line" and "in print" magazine called Cooks Source. The friend was asking for hints on how to get published. Great, except Monica had never been contacted for permission by Cooks Source and was very surprised to find out it had been printed. To read her story in her words go here: http://illadore.livejournal.com/30674.html

Now, we all know this happens. Stuff gets copied all the time from the first school report copied directly out of the encyclopedia (ok, they didn't have computers while I was in school) to stuff going viral over the internet in minutes... like this one did. We learn as we grow what we are able to copy and what not to.

It would seem to me to be a no brainer when it comes to lifting an actual article from somewhere off the internet, you should obviously get permission. A writer and an artist has the right to have control over their work to a certain extent. And when your works stand the test of time, such as Shakespeare or Michaelangelo, even though out of copyright reach, would, if someone claimed as their own outrage the public no end.

Monica posted the above Live Journal post last Thursday about how her article ended up in a little known cooking magazine and that post has caused quite a firestorm. Why? Well, Judith Griggs, the editor of said magazine would have us believe it was because of an overworked mistake on the part of her staff. (I'm not convinced she really has a "staff", but that is my opinion only.) But no. When contacted about the article Judith wrote such a snarky response to the author that it was just not to be believed. (Monica includes it in her live journal post above.) In effect, Judith stated not only did she have the right to use that article, but that the author should be grateful and pay her for her editing efforts. Wow.

This touched off a rocket of indignation (even the Washington Post picked it up) that an honest to goodness editor with that much experience could actually believe any of the drivel she had sent to Monica in her email. People immediately started "liking" the magazine's FB page and commenting on what they thought of the whole fiasco. Of course, mob mentality took over. Some comments only showed the glee of pointing fingers at someone else. Some were very brutal and mocking. The more intelligent were actually researching past articles and posting links to where they came from, some even from the Food Network. People were split about 50/50 on whether to support the advertisers in her magazine or not. Myself, I hope the advertisers pull their money, not supporting a thief, and then I hope people support those small businesses like crazy.

Well, hopefully Judith has learned one lesson from this experience. Once your words are sent on the internet, even if you think it's a private email... those words are out there. They can't be brought back. I hope she's learned the following as well:

1) Just because something is on the internet does not make it public domain.
2) Old English is still acceptable on sites that deal with historical cooking. They don't need your editing.
3) While she claims she apologized to Monica, and sent the donation she requested, she maintains an air of superiority on her web site and does nothing to acknowledge the rest of the stealing. http://www.cookssource.com/
4) I hope she learns more about the internet. She refers to her FB page as being "hacked", not realizing that page is a public page, people can post what they want.
5) I hope she learns more about research, an important skill for an editor. Finding a phone number for FB shouldn't really be that difficult. Call the business office of the state where they are licensed to do business.

Now, we ALL makes mistakes. In reality, that IS how we learn. The point is to learn from the mistake, admit it, take action to correct it and move on. Don't try to deny it, make it look like you really knew what you were doing all along and are somehow superior to others. As artists let us respect others' work, it never hurts to even say, hey, this artist inspired me.  Lifting each other up can only enhance our own art and take it to new levels. But artist or not, let's hope we all learn a lesson from this about how words are on the internet... quite possibly forever.
Posted by CeltCraft at 2:28 PM No comments: Links to this post