People I Hang Around With on Weekends (Sometimes) 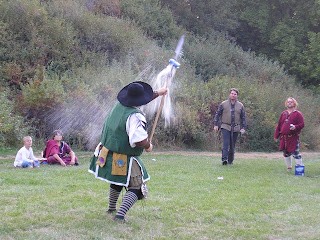 When my store was open it didn't take long for someone from the SCA (Society for Creative Anachronisms) to show up. The word Celt seems to attract a certain crowd of people. Never heard of them? Neither had I. Turns out they are a Medieval reinactment group, and they have a lot of fun.

A lady by the SCA name of Dubessa drug me to my first event to merchant, and since then, they just keep asking me to show up. I don't necessarily make a lot of money at these events, but I seem to laugh a lot, and I figure, that should help keep me young, right? I managed to snag this picture at an event last fall of some of the gentles playing "spear the beer". I'm not a photographer, but I have to say I am immensely pleased by that shot!

At an event last month, the shire of Arrow's Flight held an event that also included a "worst garb" contest. Not much was seen of this manner of garb until a youth who goes by the name "Rat" decided to put the competition into high gear. 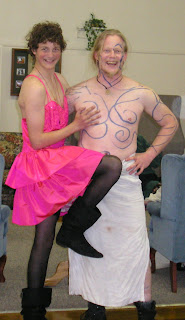 You could then hear a few mutterings of "I'm not about to be shown up by a teenager!" and others went off to don their hideous garb (bad imitations of Braveheart and a Flower Child Scot among them). However, many ladies in the populace kept adding to our Rat Boy's garb in order for him to outshine the others. (The progression of such is noted in these pictures.) His mother was out being a Marshall for some rapier events, and pretended not to know what her youth was up to. 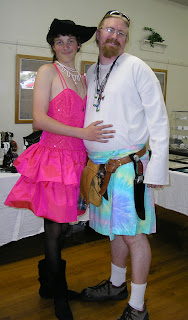 I have to say I really admired the daring of Rat Boy. He willingly posed for pictures that will certainly make their way to his mother, will be shown to any girl who shows up to an event with him (by EACH of those who were taking pictures) and of course, get posted to the world wide web. (I DID get his mother's permission!) It is the general silliness of these events that keep me coming back. (Have you ever seen a man turned into a human shrimp pinata with 30 or so kids running after him with "boffers? Hah! I thought not. Unfortuneatly, I didn't get a picture of that one!) These pictures were all just too good to keep to myself, so here they are for all to enjoy! 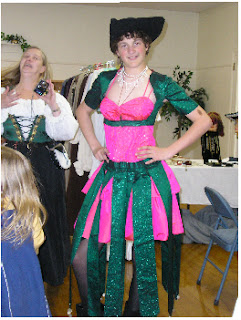 So, the next time you are driving by a park, and see people dressed sort of funny, hitting each other with sticks or rapiers, maybe with a picnic basket on the side, stop by and say hi. You never know what kind of silliness and mayhem you may be in for!
Posted by CeltCraft at 1:26 PM 5 comments:

Why am I always late?

I'm trying to finish making 40+ beads for a ceramic bead exchange. Well, the deadline was Saturday. I had all sorts of grandiose thoughts of making these fun little pots, and after I made 10, said, yeah, not this go around! So I took the easy way out and have been making a combination of butterfly/dragonfly beads. The first ones are just out of the kiln, and so if I manage to squeeze out two firings today and two tomorrow, I might actually be able to send these out on Wednesday, so I won't be too late! (I also got a wonderful surprise of a small order of two ceramic runes to be shipped to Australia! Cool!) 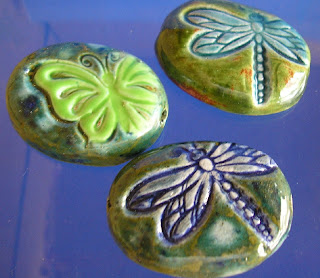 We are still doing small clean up things from the flood a couple of weeks ago. The bonus is, I woke up at 2 a.m. the following morning with the stomach flu! Man, the only thing that would have made that day worse, was to have woken up THAT day with the flu instead of the next day.

I had also planned to go to a Highland Games in Las Vegas in a couple of weeks, but there is just no way I'm going to be ready. I really hate to skip that one, but I guess it's better to keep plugging away and just try to be ready for the Ren Faire I'm doing in May.

My daughter and her hubby are currently building a new house. I've told them I will make their house numbers out of ceramic for them to be bricked right in with their brick. They need it very soon, and with taxes also due? Well, you see where this theme is.

I've heard that people who are always late have a huge disregard for other people. Sorry, I can't buy that! The theory I DO like, is that people like me just have unrealistic time perspective and try to fit too much into too little time. Now that sounds more like me! I'm always working on a deadline. As soon as one passes, well, here's the other one! So, I'll keep plugging away and maybe I'll just get better at squeezing stuff into where I squeeze it! I do hope everyone had a happy Easter, Passover, or at least, just a great Sunday!
Posted by CeltCraft at 3:45 PM 2 comments: