The Trek to Delicate Arch 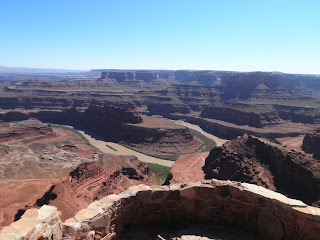 My husband's niece and her family decided they were coming to visit Utah and thought it would be great for us to meet them in southern Utah and we could see some sites together. Moab is beautiful, there are at least three national parks within 35 miles. It's a great place to visit, so many things to do! But in July... it's HOT!!!

We mostly drove around Arches and Dead Horse Point the first day. Getting out of our wonderful air conditioned cars to look at the sites next to the road and take a few pictures. One of the wee ones was sick, so not everyone was along on that trip. But it was a nice drive, incredible scenery was everywhere you looked. 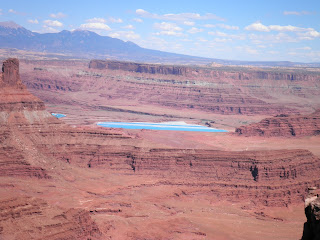 But if you go to Arches National Park, you want to see Delicate Arch. It's the symbol of Utah, in a way: There was the incredible picture of the torch at sunrise for the 2002 Winter Olympics; (Olympics) Delicate Arch is on one of Utah's license plates (license plate) . Well, Delicate Arch you just don't see from the road. So the next day we all set out to see this beautiful scene. It involves a 1.5 mile hike that starts out on a nice graveled trail that lures you in... "this isn't so bad", you think and you look ahead of you and wonder what all those people are doing on that rock face up ahead...

Well, that rock face is part of the, ahem, "trail". I say "trail" because there are actually times no discernible trail is visible. No, you're not left to wander finding your own way, little cairns mark the way to guide you when the terrain is too rocky to have a normal trail. 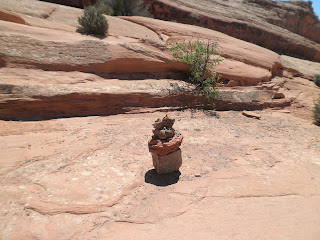 In other words, this is not a stroll.

14 of us, ranging in age from 52 (that would be me) to 10 months, started out on that trail. Our niece Jodie, and her kids turned back first. The altitude and heat combined were really affecting them; we're down to 10. Our daughter Nikki was carrying the 10 mo old in a carrier that had a metal frame. Every time the poor baby relaxed her legs, the hot metal would burn her little legs. Nikki saw the rock face up ahead and was pretty sure she wouldn't make it over that. She, my husband and her 5 yo son turned back then. Then there were 6. Near the top of that rock face, our daughter in law, who was spending most of her time carrying her 22 mo old son, decided he was done with the trip. She has made the trek before, so she said she'd go back and my son could go on and make it to the top. The almost 8 yo DJ decided to go back with her. This left my son J.T., 3 yo Emma and myself to hike to the finish. We passed a lady dressed in what I believe to be representative of the Hindu religion. Quite an older woman, she was quite excited at the site of the red hair of my granddaughter. She held out her hand, which Emma immediately "high fived". She then brought her hand to her mouth and kissed it, evidently happy to have touched some form of good luck. 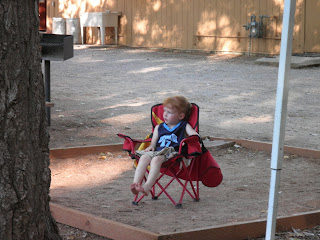 Emma was the one who was sick the day before, and no amount of urging convinced her to go back. She wanted to stay with Nana. So on we went. We made it to within about 8 minutes of seeing this beautiful work of nature when little Emma hit her wall. She was done. I sent J.T. up ahead to see how much further it was and stayed in the shade with Emma. He went up, took some pictures and then came back, waited in the shade with Emma while I climbed the final leg. There was more shade after the rock face area, there had been very little up to that point. The "trail" led to what was becoming a ledge, I paused in a shady spot to take this picture. 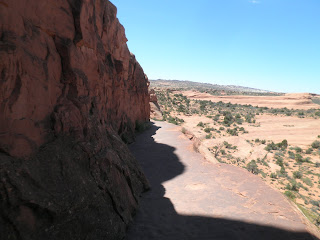 Beautiful, but not what I had come all this way for. Climbed further, onto another ledge. A few people resting in the shade here. The ledge gets higher and higher and you finally see the end of the ledge... 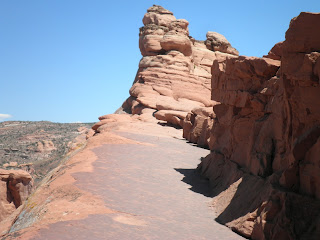 You climb up, round that corner, and there it is. It's like you hear all the Native American tribes chanting in respect for it's beauty as you round that corner. It's an amazing sight. Yep, I've seen it on TV, seen tons of pictures, driven a car with one of those license plates. But nothing compares to struggling up that trail and being rewarded with that sight. 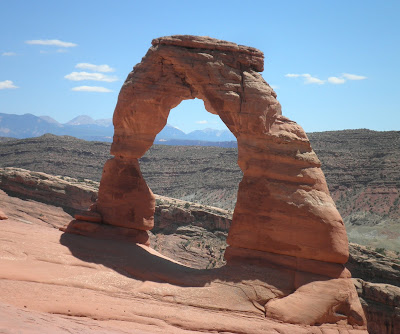 Now, we just had to make that trek back. We had very little water at that point. We thought we had planned, there were water bottles for everyone, a couple of small water jugs and at least one hydration pack. Nope. Not enough. We really watched Emma on the way down, making sure she would drink at regular intervals. We ran out of water about half way down. J.T. took Emma on his shoulders at that point and started going down as fast as he could, being dehydrated and carrying 25 pounds on his back. I walked slow, my legs were shaky and when I looked down at my hands at one point, they looked blue. Hehehe. There was a large rock with a few small rocks underneath it that provided some shade, just about the only place on the lower trail that did. After a short rest I took Emma by the hand while J.T. power walked up ahead to try and get water and bring it back to us. We ended up not being that far behind him, but the site of him coming back with a bottle of ice water was beautiful. VERY appreciative of the gift of water at that point. Emma was such a trouper!!!

Today is Pioneer Day in Utah. We celebrate the journey of the pioneers on their trek to Utah for religious freedom. I have ancestors who made that trek, not in the original company, but in several of the ones that followed. Conversation turned to that trek more than once this weekend. Amazed that people walked day after day, covered from head to toe in several layers of fabric, some women giving birth, some children being buried on the way. People left everything they knew to go to some unknown place and start over. In the burning heat; the driving rain. Crossing rivers, desert and mountains to "make the desert blossom as a rose". I hope we make them proud, because I'm not sure I would have been strong enough to make it. I am very grateful, especially after this short hike, that they did what they did for me. Thanks. 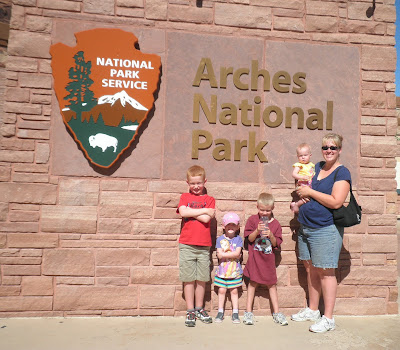