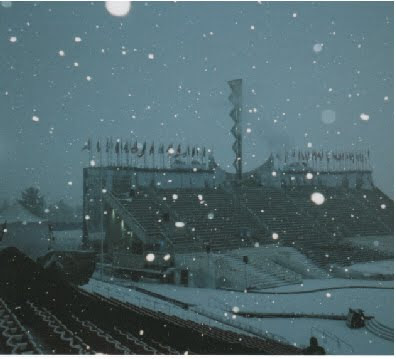 A few days ago another Winter Olympics came to an end. I was so lucky to be a part of the 2002 Winter Olympics in Salt Lake City. I want to try and describe what the experience was like.
They had apparently chosen all the volunteers when Don Mischer Productions came in and said, "But wait, we need approx 800 volunteers to put together the packets that we will use for Opening and Closing Ceremonies!" I got a letter saying I wouldn't get the cool volunteer uniform, the watch and other goodies that the regular volunteers got, but I would get a coat, did I still want to help out? Well, I thought that being a part of it would be better than nothing, so I said yes. We started out in a wharehouse on the north side of Salt Lake putting these packets together. They consisted of plastic raincoats, flashlights, a seat pad, and for the Opening Ceremonies at least, a very complicated series of boards to spell out "Light the Fire Within". They had never done anything this complicated before, and were wondering if it was going to work out. Well, some people thought that putting these things together was boring, and were sneaking out when they were going to the bathroom. There was a group of us in the back that were giving them all sorts of grief for leaving. We were laughing and having a very good time. The one guy from DMP managed to get all of our names that night... left me wondering what the heck for!

Well, it turned out that he picked roughly 110 of us volunteers for further duty. We were asked to be "athlete ushers" for the Opening and Closing Ceremonies. They didn't want there to be a "log jam" out on the field while the athletes were seated so we were there to help. We were all to show up early in the morning of the Opening Ceremonies to help put the packets on each seat. Yep. Each. Seat. Although it went much faster than I thought it was, we actually had to clear snow out of the stadium first! The snowy picture is one I snapped after stepping into the stadium for the first time that day. Why I didn't take a picture in the other direction, I can't say, but there was a huge boom type camera that had crashed down all over the seats during the storm the night before. There were 3 or 4 huge balloons that were to be used in the program and one of them was broken, too. They changed that part and used them for the Closing Ceremonies.

I still get goosebumps seeing the athletes start the parade of nations. I had watched these on TV since I was old enough to understand what they were, and here I was, standing there watching them come in and I was a (small) part of it! I loved it! We were in and out of the stadium at different times for different duties. For any locals who are reading this, there is a street that runs on the south side of the stadium, that was closed during the Olympics. That is where I was standing when the torch was lit, and this pic was snapped then. 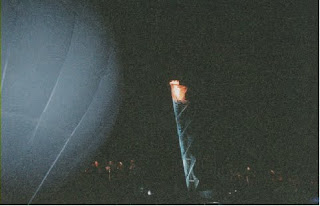 I've always loved the look of all the flashlights in the stadiums, they seem to do that for almost every Olympics. Being there with all those flashlights? Cooler than being in a fairy land! (Ok, I've never been IN a fairy land, but this was cool!) It truly is an awesome sight that TV or pictures just doesn't do justice to. And of course, you see in the pic that the audience has some help. They actually do a quick runthrough of all the cues with the audience before the show goes on the air, and we didn't know until then if all the cards spelling out the theme would work. They did, and again, how cool! 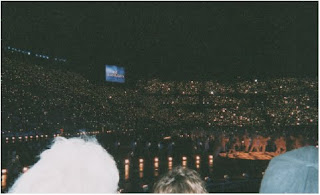 As I was leaving the stadium, a bunch of people had mobbed Dick Button and Dorothy Hamill so they could have their pic taken with them. They were two of the torch bearers into the stadium that night. I didn't have time to jump in, but I snapped the pic of them anyway! 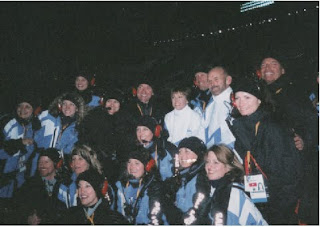 It was a memorable night, and it seemed like all of us in the infamous "Green Coat Brigade" recorded the event and had to go home and watch it all over that night! (Most of us didn't get home until about 1:00 a.m. Yeah, we all watched anyway!)

Of course, we got to do it all over again for Closing Ceremonies. A beautiful day, and I made sure I got some fun pics. Up on the bleachers at the west side, I took this pic of the torch, with the Wasatch mountain range beind. It's my favorite shot I took of the games. 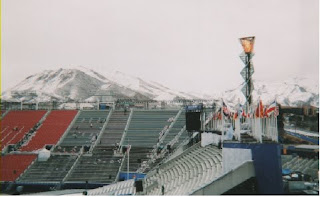 I had always enjoyed watching Scott Hamilton perform. He has a wonderful sense of humor. I snapped a picture of him interacting with the young boy who sort of had the "lead" skating role throughout the two ceremonies. He was having a lot of fun with that young man, so it's always nice to see that people are genuine and it's not just an act. 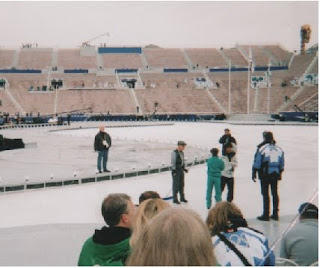 I decided that I should actually be IN a couple of pics to prove I was there, so here are a couple of pics of me, one with an asst. director from DMP and of course, one with me in front ot the torch. I'm so glad that torch is still here, it's not up high on the bleachers anymore, it's down in the plaza that is just to the right of the torch in the pic with the mountain back ground. They've lit it once or twice since then, but since it's very expensive, it's pretty rare. 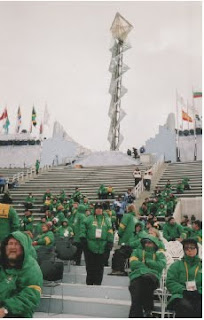 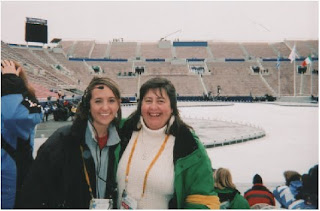 I was so impressed with the athletes I came in contact with. During the Closing Ceremonies there were a lot of US athletes sitting above one of the exit points. As the "Children of Light" exited the stage for the last time, those athletes yelled down at those kids telling them how awesome they were and telling them thank you! I felt right then that whatever money we put into these games is worth it.

This last picture is to make sure I tie in the glass/jewelry thing... I made these earrings of SLC's Olympic logo and wore them throughout the games. I was quite proud of myself, LOL! I just hope the politicians can keep out of the Olympics from here on out and it can truly become a beacon of Peace. 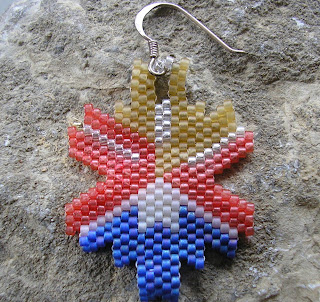