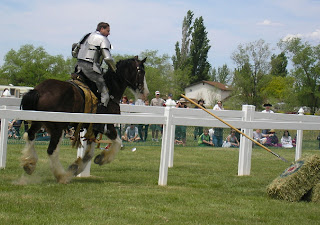 Summer is usually when I do most of my shows. I spent the last two weekends at a local Renaissance Faire, in it's second year of existance. I was pleasantly surprised last year when I did this show... I didn't expect much, but actually had an average show, sales wise.

This year, the sales numbers were lower, in all probability due to the vastly increased number of vendors! But I keep telling myself that I'm helping this team build up what in a few years could be an awesome event. They managed to secure a jousting team this year, which I think was the hit of the show. Captain Jack Sparrow (with his lady) and the Greenman happened by for a visit this year, too. 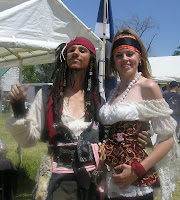 I like doing these types of shows more than the typical "jewelry" shows. The other vendors are usually so nice, and you can find yourself laughing quite a bit, even if the show happens to be slow, like this one was. I can handle not making as much money as I'd like if I'm having a really good time! There was a young man selling at his first event just across from me. He was selling armor and chain maille type things, and was making "boffers" (a "fake" sword) and teaching the kids who came by how to use them and fight with them. I took my 3 1/2 year old grandson DJ with me last Friday, and he finally got brave enough to fight with "William". When he was instructed to "stab" William in the stomach, William clutched the boffer and fell to the ground, at which point DJ ran giggling back to me. 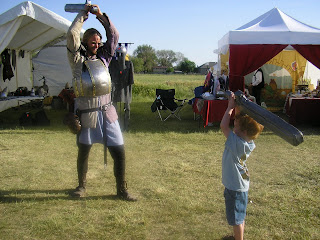 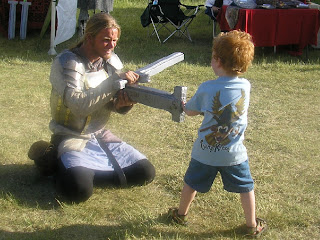 Of course, I had to buy him a sword after that (to go with the Dragon hat I already bought him), and he's been talking about it for three days! Even though he fell asleep that night on the way home, he woke up enough to run downstairs and say, "Daddy, daddy! I dead William!" Grandkids are just so much more fun than kids!
Posted by CeltCraft at 2:50 PM 2 comments: Links to this post