The Road to Hell is Paved With Snow 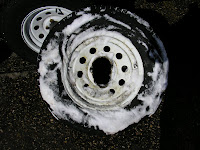 I admit it. I leap before I look most times. I actually do look, but then I get distracted by all the sparkly water and before I know it, I've jumped right in. You'd think that after almost a half century, I'd learn. Nope.

If you've read the prior posts, you know I got invited to a show in Tucson. The day we left was a portent; the worst travel day for the entire state of Utah this winter. Since I had bought my hubby tickets for "Blue Man Group" for Christmas, and that was the night before we left, there really wasn't much chance of leaving early.

There was a lot of snow on the roads. Himself is a good driver and is smart about things. My daughter and her two moppits (fondly referred to as "El Destructo" and "The Red Headed Tornado") tagged along for the trip, since we borrowed her SUV and trailer. We really had no problems, other than slow going, until we reached a pass about 30 miles or so out of Kanab. Then we lost a wheel off the trailer. (Remember Ron White's routine of "Sick on Lugnut Day"? The wheel came _____ OFF!) Now. Small miracles did occur here. There was no cell phone reception there, but there WAS a sheriff's deputy following behind us who radioed for a tow truck for the trailer. Not good enough, however. Tow truck couldn't make it up the canyon and had to call a tractor to come pull HIM out. Then a snow plow showed up just as we had decided we were going to have to abandon the trailer for the night and managed to plow out a section off the road for us to park it.

So, we boogey on down the road and check into a hotel, sneaking the 13 year old miniature dachshund into the room. As you can see, the two year old managed to keep himself entertained with the luggage rack in the room. As we finally headed back up the canyon the next afternoon to get the fixed wheel put back on the trailer, my daughter stood next to the snow bank. Loooooots of snow. (Which was almost all gone on our return a week later!)So we finally get on our way, basically 24 hours behind schedule. Not a huge problem, this day is set up day, so I still have some time. 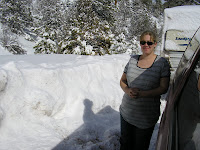 I'm trying to be professional, and let the show promoter know that I'm experience delays, but I have no local contact number for her. I have her California number and I have an email. I leave messages with both, but I don't get a response until about 11:00 that night. We're still driving at this time, but it's ok to come in early the next morning and set up. Fine. It's 3:00 a.m. before we find our camp site and get to bed.

I get there the next morning, she walks in right behind me, and shows me to my booth space. Um, problem. This is not the booth I paid for. "I was across from a door to the outside" I say. She points to a decorative door in the wall and says "Well, maybe it was that one, and walks away." I don't have time to fight it right now, and I want to look at a map before I make a big deal.

Things decline from there. I sold $5 or $10 the first day. It becomes apparent that there is a bit of a "turf war" going on between the promoter and the venue. Each is blaming the other for the change, and each are leaving "he said, she said" kind of papers with us each day, and each are pushing all the vendors to sign with one or another before the show ends. Well, Ms. Promoter doesn't even have a venue for next year, and she's nowhere to be found through the show because she's out looking for a venue and trying to get a contract signed. In the meantime, we've had to fend for ourselves finding passes, where do we park, what about internet access... the questions go on, and I'm getting answers from other vendors. It begins to dawn on me that I never got a contract from her, just a one page document that said I was showing up and paying for booth number X. Also, the only people showing up to this show are bead store owner types who are buying strands of gemstone beads for their shops. This was promoted as an artisan show, and I'm surrounded by imports. It's day number 5 of a six day show before I see the promoter again and after speaking with her outside, she lifts a hand and says "I just can't talk to you anymore", and walks away. Wow. 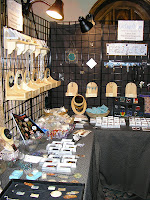 This is my first "big" show, but I could not believe the unprofessionalism. I'm getting comments like "you're lucky she had this for you" and "she's very unorganized". I'm not lucky, I expect to get what I pay for, and that is more than just a space. I try to be professional and I expect the same in return! I lost a lot of money on this show.

The bright spot of the show was meeting people I had chatted with on line, and in making new friends, meeting new artists I hadn't heard of before. (Ok, with the exception of a well known bead artist who had to be the coldest woman I had ever met! Well, almost, anyway.) I decided that if the show was going to be a financial disaster, I was going to pick the brains of every vendor I could. How could I display my stuff better? Is my stuff just crap? I did learn a whole lot about what to look for in shows from now on. Bottom line, I didn't sign with either group. It was school of hard knocks time, but I did learn, and hopefully have made some contacts that could really turn out to be fun!

So, in thanking those who kept me from jumping off a ledge during this show (I'm actually surprised at myself; I was very calm the whole time!)I want to recommend these wonderful people:

If you are looking for some fantastic glass beads, Nikki Thornberg is your woman! She is totally awesome! http://www.thornburgbeadstudio.com/

If you want to try some chain maille, Spyder will help you out with her great DVDs and rings. Her booth partner from Blue Budha Boutique will too! (Forgive Spyder in the pic... she's just very excited about her Wubbies!{New pliers}) http://www.spiderchain.com/

Joan Tucker from Off Center makes beautiful ceramic pendants, especially porcelain baskets for your beady flowers, and she has a big heart. (Joan's on the right. I don't remember the other young lady's name, but she was sitting in for artist Marsha Neal who had just had a baby! How cool is that?) http://www.offcenterproductions.com/

Sarah Tippet is another great glass artist. She has way cool glass donuts and puzzle pieces. (Stole one of the latter for myself!)
http://sarahtippitglassart.blogspot.com/

And Holly Gage is one incredible metal clay artist. I work a bit in metal clay, and I still swear that one of her pendants was fabricated... http://www.hollygage.com/
Posted by CeltCraft at 1:47 PM 2 comments: