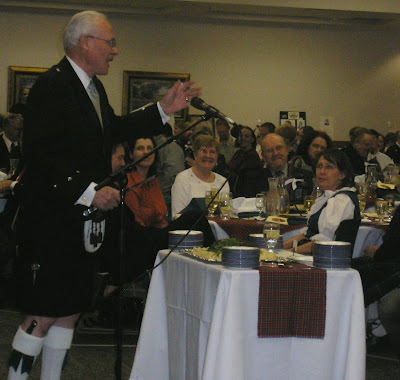 Yesterday, January 24, was one of those wonderful, fullfilling days. For the first part of the day, I introduced 7 new people to the art of lamp working. What an enthusiastic group of people! They were each so excited as they walked in the room, they could hardly wait to get their hands on those torches!

It was a great group. They all pulled stringers like they'd been doing it forever. Everyone had a kit or access to one by the time they left. We'll being seeing all of them again for supplies I'm sure! I was having battery issues with my camera but there is a picture of each of the students having fun playing with fire.

After class was over, and everything was all cleaned up, I went home, changed clothes and then myhusband and I went to Provo for the Northern Utah Scottish Association's annual Burns Supper. I love these events! The food is always representative of Scotland, whether it's Salmon, beef, cock-a-leekie soup or of course, the obligatory haggis. This event celebrates the birth of the poet Robert Burns, and since he wrote "Ode to a Haggis" you HAVE to eat haggis at this event! And, thankfully, the chef at BYU really knows how to cook a haggis and it tastes wonderful! The above picture of the gentleman with the knife is the reciting the "Ode" (he is an actual Scotsman, so he recites it every year). Before his recital he mentioned that those who have eaten a hot dog can cast no aspertions on the haggis!

The second picture of the event is actually the traditional "Toast to the Lassies" (Although you obviously can't tell what's going on, I just wanted a good pic of the crowd). Both the toast and it's equally traditional rebuttal were very humorous.

The next pic is of my husband sitting at our table. He's actually more interested in the goings on than it looks.

Posted by CeltCraft at 4:12 PM No comments: